Trottenberg: The Goal Is to Roll Out 13 New SBS Routes in Four Years

by Stephen Miller
It’s been a big week for buses. Public meetings kicked off for Select Bus Service on Woodhaven Boulevard, signs of SBS are starting to crop up on 125th Street, and news broke that bus lanes are coming to Utica Avenue. After Wednesday’s infrastructure forum, I caught up with Transportation Commissioner Polly Trottenberg to discuss the de Blasio administration’s commitment to speed up bus service citywide.

Trottenberg says she plans to paint the town — or 13 bus routes, at least — red. Photo: MTA/Flickr
During the campaign, de Blasio promised “to phase in the creation of a citywide Bus Rapid Transit network with more than 20 lines.”
Trottenberg said the goal of 20 lines includes existing SBS routes. “The mayor has committed to, in his first term, 20 SBS routes altogether. 125th Street will be number seven, and we’re going to try to do 13 on top of that,” she said.
That’s not quite 20 new full-fledged BRT lines, but 13 routes in four years is a big step up from the current rate of approximately one new SBS route each year.
Select Bus Service includes a number of components to speed bus trips. DOT and the MTA have implemented some of these, like limited-stop service, bus lanes, and transit signal priority, outside of the SBS program. Other upgrades, such as having riders pay at a machine before boarding, are restricted to SBS routes.
Off-board fare collection is unlikely to expand beyond the SBS program anytime soon. Echoing comments made by MTA Chair Tom Prendergast last year, Trottenberg said widespread deployment of fare machines will likely be on hold until at least 2019, when the MTA is scheduled to implement the long-delayedreplacement for the MetroCard.
The MTA says each off-board ticket machine costs $25,000, not including installation and maintenance. “We’re trying to be smart,” Trottenberg said. “You don’t want to invest in too many new machines that then maybe we’re going to have to change.”
Another factor in off-board fare collection is proof-of-payment enforcement onboard the buses. The MTA loses $50 million annually to bus riders who don’t pay the fare, according to the Daily News. The authority’s Eagle Team, which performs fare evasion enforcement on SBS and local buses, has cut fare-beating between 48 and 80 percent on SBS routes, according to an MTA board committee presentation in January.
“On the one hand, there’s now more of a cost with enforcement. On the other hand, they’re getting good compliance. People are paying the full fare,” Trottenberg said. The MTA declined to discuss the net impact of off-board fare collection and enforcement on the authority’s budget. The authority also refused to say how many people are in the Eagle Team, but noted that in addition to its fare enforcement duties, the unit serves as a crime deterrent on buses.
Another way to speed bus trips is transit signal priority, which DOT has implemented on eleven bus routes in five boroughs, according to the city’s latest PlaNYC progress report. Next in line: Utica Avenue’s B46, which is set to receive signal priority and dedicated bus lanes this summer, according to DNAinfo. Organizers with the Riders Alliance are at work building community support for full-scale SBS improvements sooner rather than later on the B46, the city’s second-busiest bus route.
Albany allows only six specific SBS routes to have their dedicated lanes enforced by camera, leaving enforcement of bus lanes on Webster Avenue, 125th Street, and non-SBS routes like Utica Avenue to police precincts.
Planning for the next SBS route — Woodhaven and Cross Bay Boulevards, which Trottenberg called “a big priority” – kicked off with the project’s first public meeting Wednesday evening. Ridership on Woodhaven is among the city’s fastest-growing, with 31,000 daily riders on local buses and 2,800 daily on express buses, according to DOT. The city’s latest PlaNYC progress report said Woodhaven would receive “initial bus priority enhancements” this fall.
Woodhaven is an extra-wide road with space for center-running, physically-separated bus lanes, which have not been included in SBS projects so far. An ambitious street redesign could also save lives: There were eight pedestrian deaths between 2010 and 2012 on Woodhaven, making it the most dangerous streetfor pedestrians in Queens, according to the Tri-State Transportation Campaign.
DOT has focused its Vision Zero efforts on major arterial streets like Woodhaven, which have a disproportionate share of the city’s pedestrian fatalities. The agency says it is looking at safety improvements for pedestrians and drivers during the SBS project’s community input and planning phases.
Posted by The West 12th Road Block Association at 10:17 AM 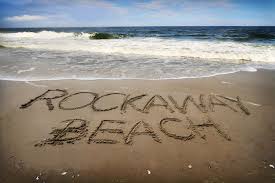